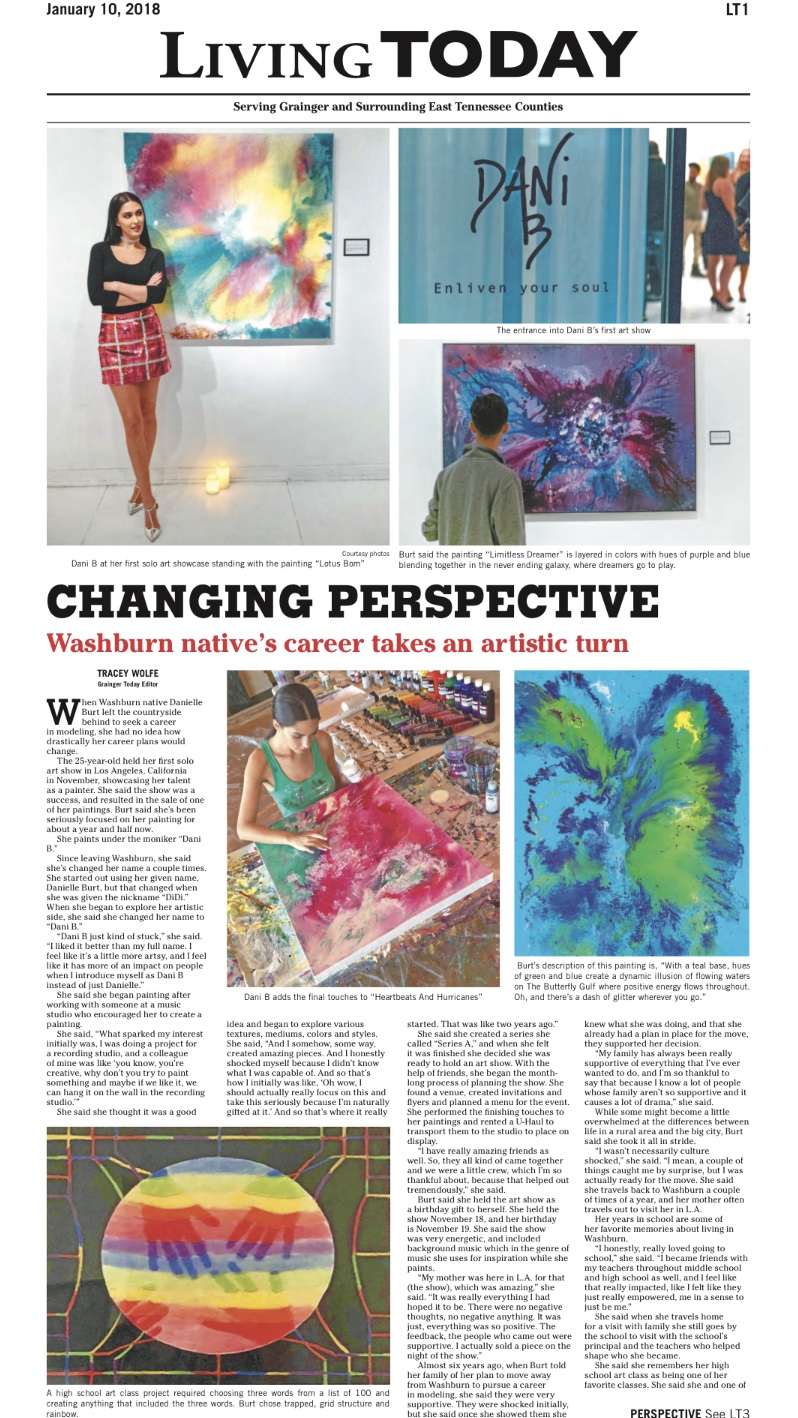 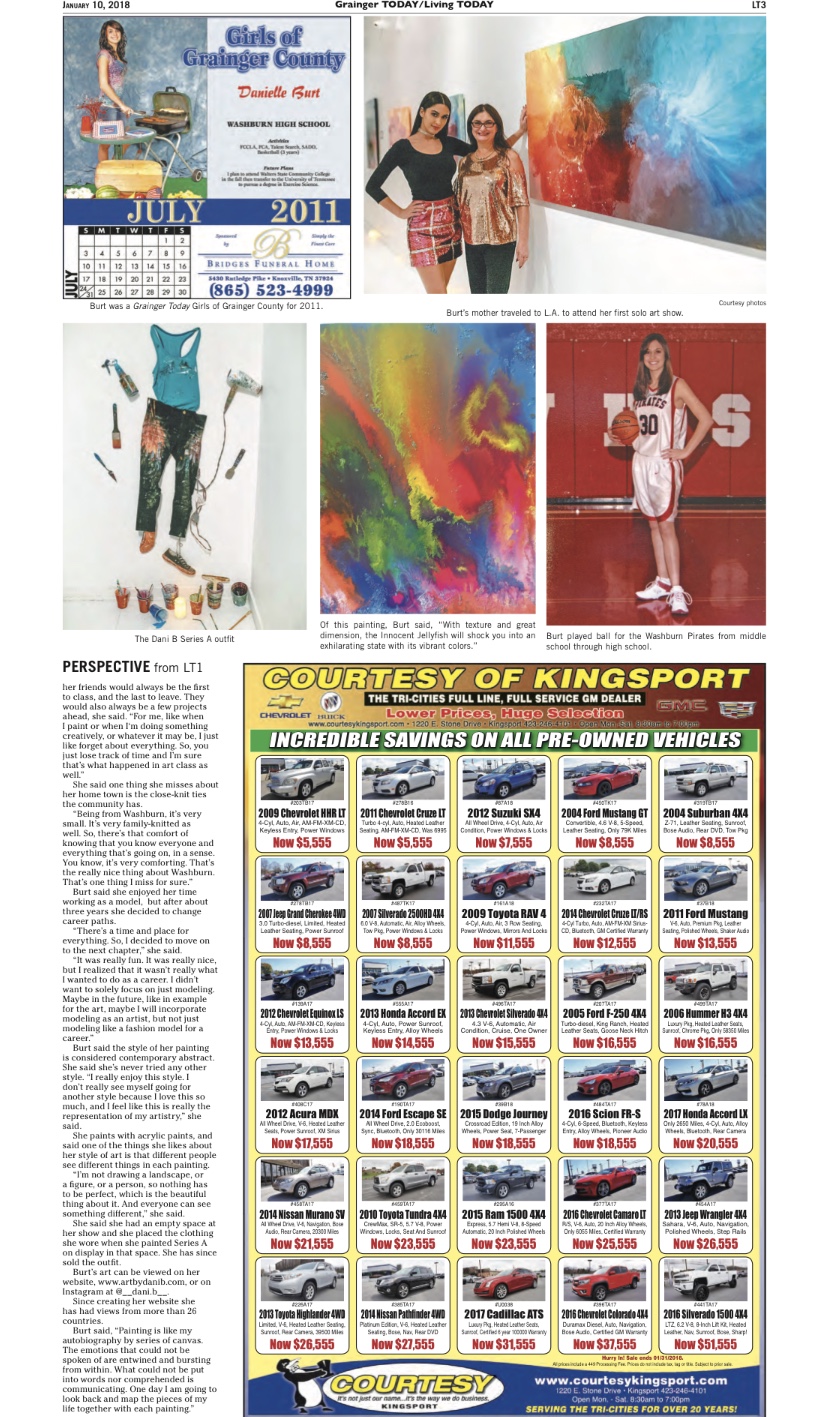 When Washburn native Danielle Burt left the countryside behind to seek a career in modeling, she had no idea how drastically her career plans would change.

The 25-year-old held her first solo art show in Los Angeles, California in November, showcasing her talent as a painter. She said the show was a success, and resulted in the sale of one of her paintings. Burt said she’s been seriously focused on her painting for about a year and half now.

She paints under the moniker “Dani B.”

“Dani B just kind of stuck,” she said. “I liked it better than my full name. I feel like it’s a little more artsy, and I feel like it has more of an impact on people when I introduce myself as Dani B instead of just Danielle.”

She said she began painting after working with someone at a music studio who encouraged her to create a painting.

She said, “What sparked my interest initially was, I was doing a project for a recording studio, and a colleague of mine was like ‘you know, you’re creative, why don’t you try to paint something and maybe if we like it, we can hang it on the wall in the recording studio.’”

She said she thought it was a good idea and began to explore various textures, mediums, colors and styles. She said, “And I somehow, some way, created amazing pieces. And I honestly shocked myself because I didn’t know what I was capable of. And so that’s how I initially was like, ‘Oh wow, I should actually really focus on this and take this seriously because I’m naturally gifted at it.’ And so that’s where it really started. That was like two years ago.”

She said she created a series she called “Series A,” and when she felt it was finished she decided she was ready to hold an art show. With the help of friends, she began the month-long process of planning the show. She found a venue, created invitations and flyers and planned a menu for the event. She performed the finishing touches to her paintings and rented a U-Haul to transport them to the studio to place on display.

“I have really amazing friends as well. So, they all kind of came together and we were a little crew, which I’m so thankful about, because that helped out tremendously,” she said.

Burt said she held the art show as a birthday gift to herself. She held the show November 18, and her birthday is November 19. She said the show was very energetic, and included background music which in the genre of music she uses for inspiration while she paints.

“My mother was here in L.A. for that (the show), which was amazing,” she said. “It was really everything I had hoped it to be. There were no negative thoughts, no negative anything. It was just, everything was so positive. The feedback, the people who came out were supportive. I actually sold a piece on the night of the show.”

Almost six years ago, when Burt told her family of her plan to move away from Washburn to pursue a career in modeling, she said they were very supportive. They were shocked initially, but she said once she showed them she knew what she was doing, and that she already had a plan in place for the move, they supported her decision.

“My family has always been really supportive of everything that I’ve ever wanted to do, and I’m so thankful to say that because I know a lot of people whose family aren’t so supportive and it causes a lot of drama,” she said.

While some might become a little overwhelmed at the differences between life in a rural area and the big city, Burt said she took it all in stride.

“I wasn’t necessarily culture shocked,” she said. “I mean, a couple of things caught me by surprise, but I was actually ready for the move. She said she travels back to Washburn a couple of times of a year, and her mother often travels out to visit her in L.A.

Her years in school are some of her favorite memories about living in Washburn.

“I honestly, really loved going to school,” she said. “I became friends with my teachers throughout middle school and high school as well, and I feel like that really impacted, like I felt like they just really empowered, me in a sense to just be me.”

She said when she travels home for a visit with family she still goes by the school to visit with the school’s principal and the teachers who helped shape who she became.

She said she remembers her high school art class as being one of her favorite classes. She said she and one of her friends would always be the first to class, and the last to leave. They would also always be a few projects ahead, she said. “For me, like when I paint or when I‘m doing something creatively, or whatever it may be, I just like forget about everything. So, you just lose track of time and I’m sure that’s what happened in art class as well.”

She said one thing she misses about her home town is the close-knit ties the community has.

“Being from Washburn, it’s very small. It’s very family-knitted as well. So, there’s that comfort of knowing that you know everyone and everything that’s going on, in a sense. You know, it’s very comforting. That’s the really nice thing about Washburn. That’s one thing I miss for sure.”

Burt said she enjoyed her time working as a model,  but after about three years she decided to change career paths.

“There’s a time and place for everything. So, I decided to move on to the next chapter,” she said.

“It was really fun. It was really nice, but I realized that it wasn’t really what I wanted to do as a career. I didn’t want to solely focus on just modeling. Maybe in the future, like in example for the art, maybe I will incorporate modeling as an artist, but not just modeling like a fashion model for a career.”

Burt said the style of her painting is considered contemporary abstract. She said she’s never tried any other style. “I really enjoy this style. I don’t really see myself going for another style because I love this so much, and I feel like this is really the representation of my artistry,” she said.

She paints with acrylic paints, and said one of the things she likes about her style of art is that different people see different things in each painting.

“I’m not drawing a landscape, or a figure, or a person, so nothing has to be perfect, which is the beautiful thing about it. And everyone can see something different,” she said.

She said she had an empty space at her show and she placed the clothing she wore when she painted Series A on display in that space. She has since sold the outfit.

Since creating her website she has had views from more than 26 countries.

Burt said, “Painting is like my autobiography by series of canvas. The emotions that could not be spoken of are entwined and bursting from within. What could not be put into words nor comprehended is communicating. One day I am going to look back and map the pieces of my life together with each painting.”